If you have people from 4 countries together, you discover at least 5 new christmas traditions. This is what happened to us this year ..

Our christmas started in South West London with a walk in the late afternoon and a big meal with our friends Mike, Sonja, Louie and Moya from the monastery group, and Mike’s mother Hilde who had invited us all into her house. Mike is of half Polish origin, so we were starting the ritual by feeding each other with a piece of blessed bread and wishing each other a merry christmas – a Polish tradition. Then the feast: special tortellini, prosecco, scallop fish, veggies, a fantastic sauce, ice cream and berry desert .. Later we were singing christmas carols: Polish, German (Mike’s mum is german, I am Austrian), English (Moya), Swiss (Sonja), and Italian (Melody) christmas songs in front of a real christmas tree with real candles. Then the christmas presents … What, Santa Claus is coming? Oh, the two year old Louie starts to cry and is afraid of the big beardy man! No, no, Louie, of course the Jesus child is coming to bring the presents, confirms his swiss mother to calm him down. Strange, my thoughts wander to the chief of the Austrian right-wing party, who had stated a few days ago that in Austria we don’t want the “American” Santa, but we have “the Jesus christ child”. Interesting, that this conservative refers to a story that was invented by the North-German reformer Martin Luther. Wasn’t it St. Nikolaus, who brought the presents before? But no, it’s all confusing! The day before, our greek friend Nikos had assured us, that St. Nikolaos doesn’t bring any presents. He is the saint for all of the sailors. The presents in Greece are brought by Vassili on the 1st of January. Also there is no christmas tree in Greece, but little decorated branches on the wall – or better a little decorated .. boat, of course! It’s Greece!

His partner Maria-Fernanda from Brasil is telling us that in Brasil the US-christmas industry has taken over. There are only Santas in the big shopping malls, taking the kids on their lap for a christmas photo ..
But wait, who ist this Santa Claus?
Oh, invented by Coca Cola! Really?

Hmm. No! Dutch colonists brought this tradition to the US!
They called Nikolaos the “Sint Nicolaas” oder “Sinterklaas” – and this gave Santa Claus his name. And the myth of the rendeer sledge and the chimneys comes from a poem that was published in 1823 “The Night before Christmas” from Clement Clarke Moore or Major Henry Livingston Jr.

Enough confusion.
The same night we went to Melody’s friend Lavinia, her daughter Mael and her partner Carlo, all Italian. And there we just caught Babbo Natale in the act, standing outside on the street !! He must have brought the presents! I could swear he looked like Carlo in an itchy Chinese Santa Claus costume with a big pillow underneath his shirt. But I could be wrong ..

Next day is the “real” christmas day for English and Italian people. So we all went to the christmas tree and looked at the presents from Babbo Natale. 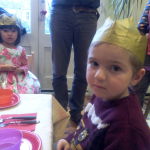 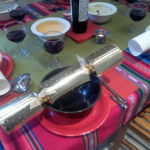 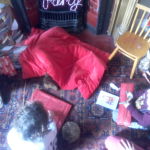 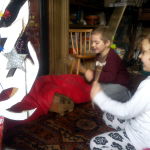 There we found another christmas tradition. A little trunk of wood, with a friendly face, and two little legs. The Tió! Of course, we are living now in Catalunya, and so we had to introduce also this Catalan tradition to multi-cultural London.

According to the right tradition, you need to feed the Tió before christmas-eve with cookies and other good things, and keep him warm with a blanket. He needs to be treated very nicely all the days before christmas, because he has a very important task: When we sing for him on Christmas day, we beat him with a little stick, and he will shit the presents!

Really, also today he is doing his job: Under the blanket the kids find more presents.