Here I am sitting and drinking my very first self made beer. A pale ale with a rich flavor of hops, and super pale because of the yeast and particles. It’s a super strong beer and far from perfect, but better then several ales I had in London. And, I have to say, to drink your own beer feels … like tasting your first tomatoes from the garden, opening your first self-made wardrobe, or playing your first song on the guitar. It’s incomparable. One month ago, I didn’t know anything about beer brewing. Yes, I was a big beer consumer. As an Austrian I was proud that I knew quite a lot of German, Austrian, Czech and some English beers that I thought are special. But I didn’t know that there is a big, globalized beer industry with low prices for consumers and suppliers, that is using quite a lot of chemical tricks to get the last out of the malt and hops. Also I didn’t know that they are avoiding stronger flavors of hops or elaborated brewing techniques, to ensure a nice, widely accepted taste. And I never fully realized that since the 80s there is a worldwide craft beer revolution of home brewers and micro-breweries against the thinning of the beer. Starting from America, the land of the fake-Budweiser. And now I am one of these revolutionaries!

, I know now that I knew nothing about beer – there are so many more kinds then the “classic” bottom fermented lagers, pils or märzen you get in the German / Austrian / Czech area! Now finally I have an idea how malt is made, what is bottom and top fermentation, how hop pellets look like, and where the best hops are coming from. I know that there are more then 500 different kinds of beer: ales, wheat, trappist, wit, weisse, gose, … And I want to brew them all !

I don’t even remember how all of this started. Suddenly I had this inspiration to look into beer brewing, and I found a recipe in the net, and then a supplier for ingredients and instruments here in Spain. First impression: Wow, so complicated. And so many things to buy !?
I followed the instructions and bought: a thermometer, a refractometer, a plastic fermentation tank 30 liter, a sieve, malt, hops and yeast and spent roughly 140 Euros.

Full of hope and a 10 liter stainless pot I started into one of the last adventures of mankind: beer brewing. It’s a lot of work, it’s smelly, it’s difficult, it’s hot. Yeah! There are basically 6 steps:

During my first beer brewing with a small amount of 6 liter, I made all mistakes a beer rookie can make: I didn’t have iodine to check the carbonization process – so I just heated a little bit longer on 64 degrees. Then I saved 65 bucks on the filter pot and found out, that 1 kg of malt when wet is much more voluminous then my little sieve. So I started to move the grains back and forth and got all the cloudy particles into my brew. Also I didn’t filter out the protein while boiling. I didn’t realize that you need to add a lot of water to get your desired quantity after boiling. When the liquid got less and less, I quickly added a few liters of water – but instead of 6 liters, I had only 4 in the end, with a much higher carbonization (=alcohol). Hicks.
The whirlpool for the sedimentation of the particles didn’t work, neither in the boiling pot, nor in the fermentation tank. Last mistake: I used the big fermentation tank (30 L)  to store my 4 liters, a big risk for infection.
You see, I was extremely lucky that all my improvised measures were successful – and the result is still better then most of the industry beer! 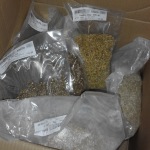 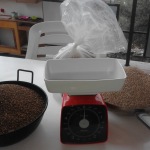 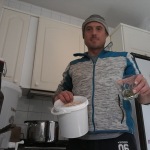 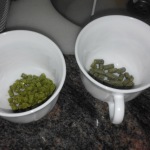 One for bitter (early), one for aroma (late) 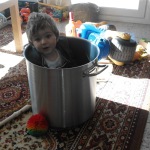 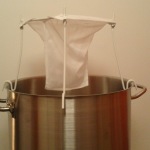 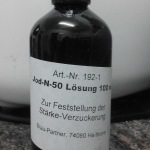 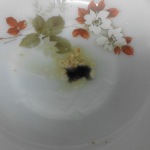 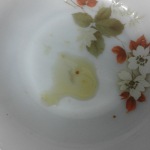 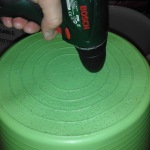 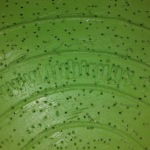 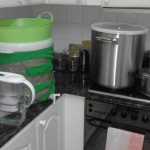 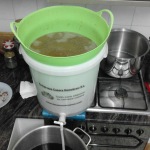 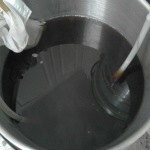 Into the boiling pot 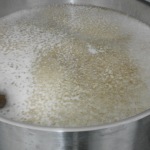 Protein on the surface 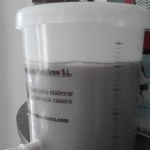 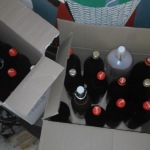 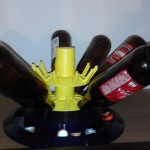 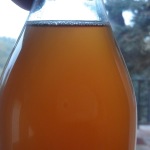 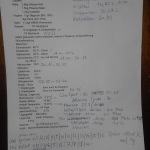 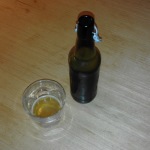 My first self made beer ever! 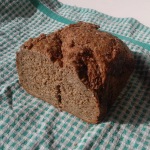 2 weeks later, exactly at full moon, I did another brew. This time wheat beer. With 25 liters, iodine, a proper filter (a solid plastic bag with self made 2 mm wide holes), a proper recipe, and a 1 meter silicone tube.
But again I ran into a bunch of new problems: Water filtering of 34 liter of water with a little pot can be time consuming (2 hours to be precise). 1.5 mm filter holes in a soft plastic pot are not big enough to get your beer through in less then 4 hours. Heating a pot of 34 liter brew from 40 to 97 degrees on a gas stove (even over 2 hobs) takes more then an hour. Cooling down 20 liters of hot brew to 20 degrees from 2:30 am to 8:00 am doesn’t work. (So Melody had to pour in the yeast later that day). And sweet brew for the bottle fermentation shouldn’t go in the fridge only, better in the freezer – to avoid infestation..

You see: what is really interesting when brewing beer, is the learning curve. Now I understand most of the products you need and can get from the home-brewing store. I know all the German speaking beer brewing forums in the net. I know some of the best books and where to find recipes for more then 100 beers online.

The second aspect is the joy of creating something with your own hands. Something you thought would always come out of a colorful tin can or bottle in the supermarket.
You need to be resourceful. You make a plan. You work for hours. You clean all the time. You see every stage of development. You smell. You taste. You care. You worry. Sometimes you even pray. Beer brewing is like having a baby. It really is!

An interesting side product of the beer are the washed out malt grains. You can use them to make a really nice bread: Take 500 g bread flour, add 250g malt grains (after dripping out) and 200 ml water, 1 teaspoon salt and 1/2 teaspoon sugar, a big soupspoon of butter, a small package of yeast, form a loaf and bake your bread at 220 degrees C for an hour. It’s fantastic!

By the way: do you know how malt is being made?
They are simply corn grains (mostly barley, or wheat), set under water so they start to grow – but immediately after that, you dry them again (and roast, caramelize, milk them).

And do you know that hops derive from the same family like Marihuana and can grow 30 cm per day? They have an antibacterial effect and different rates of alpha acid (from 2 to 15). Only the female plants have the good effect (sounds familiar?)

If you are planning to save money by brewing your own beer, forget it. The absolute minimum equipment – if you have big pots at home – is around 150 Euros. After a while you will see all kind of things that serve you well, and you’ll spend another 300 Euros. It’s not impossible, but the brake-even would take around 30-40 brews of 20 liters.
That’s because the ingredients (malt, hop, yeast) in small quantities alone will cost you around 1 Euro / liter beer. And don’t underestimate the energy costs to warm up and boil large quantities of beer for 2 hours. With a big pot of 35 liters and one big fermentation tank – out of technical reasons – you can make a maximum of 100 liters / month from 4 brews. That should be enough for you and your friends!
Consider also large amounts of time. If you brew alone (how boring!), calculate around 6 hours for the first steps. Then another hour to clean your stuff, and 2-4 hours of filling bottles. You see: there is no economical reason to brew beer.

The only reason you would ever join the craft beer movement is the unbelievable fun you have with it. And please be aware: it will become an addiction from the very first time you pour malt grains into water.

One thought on “Brewing beer”