This is the story of our car Eddie. A story of an old hero who gave his best, and died betrayed and of a broken heart, far from his home.

Our Ford Transit Van 350 T Medium Wheel Base was already in his best years, when fate sent him to us. First registered in 2006, but already with 172.000 Miles around his big tires.
We don’t know where he was born. Probably in Wales, because his number plate came from JP Tod Commercials in Abergavenny. We only know that he lived for a long time on an island in the north of Scotland. The guy who sold him to us for 3.600 pound was a very sympathic young man who wanted to brew beer on his island and thought that it would be a pity to transport the beer with the campervan. When we waited on this Tesco supermarket car park in Glasgow for a company that would ensure us – and by the way after 3 days we were not sure if any would at all – Gabriel bought this really nice Scottish Single Malt Whiskey from the area. He felt that Eddie would appreciate and we would be quite safe with the car as long as there was a good content inside.

We were living on this car park for 3 nights, phoning insurance companies, cooking, pouring our pee into the canalization and spending a lot of money at the Tesco, until finally a company was insuring us and we could move on. In this time we were not only repairing the very basic bed structure of the van that was braking down during it’s first use, but also finding a name for the car.

We were quite sure it was male. And it had this nice blue stripes, representing the Scottish flag (and then we found this nationalistic flyer under the seats). A tough, rough workhorse from the cold mountains (or the wild hills of Wales): the name “Eddie” was born.

We loved him from the first second, because he had the perfect size for a little family traveling. He was racing with us from Glasgow to London, over the canal, through France and to Italy, to Milan, and to Piemonte in Melody’s grandparents house where Gabriel opened the bottle of Whiskey for the first time. Then we went on to Austria, where a service was made. (It’s funny that the mechanics come always from the wrong side to the steering wheel and confuse kilometers with miles). From there we went on to Slovenia and to the sea in Croatia, shipping over to Italy in a little ferry boat. 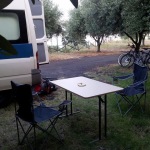 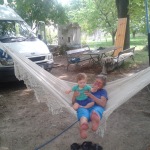 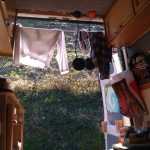 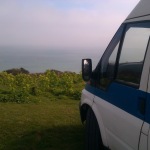 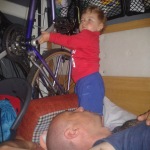 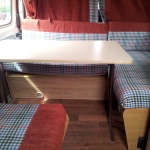 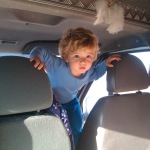 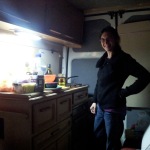 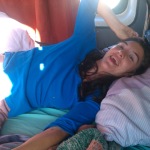 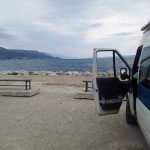 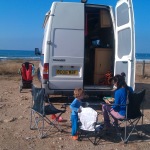 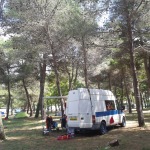 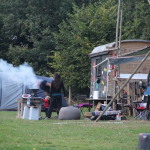 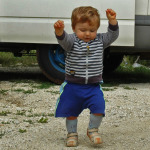 We were invited to stay with some friends in the region of Pescara, tasting self-made olive oil and enjoying wonderful hospitality in an old stone house. Later we went down the boot until Sicily, where we stayed one month with Lavinia, Illi and their little daughter Maelle in the the house of Lavinias family. It was there in the queue to the ferry boat when I saw the engine warning sign for the first time. The engine stopped and I was scared to death that we would not be able to restart before – or worse – while standing inside the ship. If you were ever waiting in a big queue in front of one of these giant boats, with all these people, and lights, and stress, you would understand my panic. Anyway, we could continue, but there was this strange sound from the engine, and a mechanic was explaining to us that it was no good, but opening the engine would be too much of a cost. The error code had something to do with the injection pump.

The Hero and the Prophecy

The sound of Eddie got worse, and so our mood. Melody needed to go to a course in the very north of Germany, and it seemed unlikely that we would be able to reach so far. 2.600 km through all Italy and Germany were ahead of us, and our vehicle sounded like a tractor. After a visit of a Ford centre in the south of Italy we were desperate. After they told us again that the engine doesn’t look good and we would have to open it (for 1.500 Euro), repair the damage and close the engine (not below 3.000 Euro, maybe 5.000 Euro for a new engine), we were coming up with the feeling that – wherever Eddie would now break down, we would find our new community home. The “prophecy of the good stranding” was born. I don’t know anymore who’s idea it was, but we both felt better with it and decided just to continue until it would happen. Tours through Europe with our Eddie.

But Eddie didn’t give up. He was a true British stubborn workhorse, designed in the US, with the idea of giving freedom to the world. We went on and on and on, crossed the mountains of Austria, the endless lowlands of Germany, and finally reached Berlin, and later the eastern sea. Nothing happened with Eddie. We had a great time for 14 days on a field with some sheeps inside a musical community. It was already September, getting colder. Our primary target was reached. Now everything that followed was already a bonus.
We decided to go on, to Austria, where Gabriel was hoping to find a good mechanic. We managed to arrive there, and through Renate, a dear colleague of Gabriel, we found this guy who used to be chief of a Ford center. Heureka! It was pure luck. He quickly found out that the damage was caused by a malfunction of one injector and he repaired everything for 1.000 Euro. We were super happy. The car had this nice sound again, the prophecy was forgotten, and we were on the road again!

We decided to go south. Visiting Melody’s mother in Milan, going to Piemonte, then to Rapallo to see our dear friends and masters, Menhir and Sherazade. We were starting to search in Liguria for a house to live with them, but couldn’t manage in the end.

Slowly this idea to go to Spain and to find a community there grew stronger. We left Italy finally on a day where all the universal flood came over us. It poured cats and dogs, and the motorway on the way towards France was interrupted occasionally by small spring floods from the side. It was there, in France, when the engine lamp came up again and we were stopping next to a busy road in the heavy rain. We were cold and in a bad mood, but continued the next day and reached Spain. Yes! We were so happy that we made it until Barcelona. It was warm. It was sunny.
But unfortunately not for very long.

On the second day of our stay, somebody broke the glass of our van and robbed all our clothes while we were on the beach. We both got scared and decided to stay in a flat in Barcelona. We left Eddie on a guarded truck park outside of town.

It was a good intention, to care for his wellbeing, but Eddie was a different character. He wanted to serve. To work. He wanted to drive. After several months, Eddie got pissed and lost the power of his batteries completely. Gabriel tried to calm him by driving over the canal to the United Kingdom for the technical inspection (MOT) in Dover and back to Barcelona, but the damage was done: he couldn’t trust us anymore. Not even a car constellation with our friend Angel would help.

One day, when we went out to do finally a nice trip to Tarragona, we had a really beautiful stay directly on the beach. But the next day, trying to go back to Barcelona, Eddie died without warning on the side of the road. His heart was already broken. I called the Austrian motorclub ÖAMTC and for the first time of our nearly 10.000 Kilometer long relationship we were watching him driving away on the top of a service-truck. Our hearts felt like stones.

We thought it couldn’t get much worse, but this was a mistaken assumption. The car was brought to a garage in a little town nearby, St Vincent. We paid nearly 400 Euro to repair the damage (leak in the water system), and Gabriel went by train and inline skates happily another time to St Vincent, to get the car back to Barcelona.

After only 30 minutes ride, the gears were not working anymore. Stop, ÖAMTC, service-truck, this time to a garage in Vilafranca de Penedes. After a little while of guessing, the mechanic found it it could only be the cylinder of the clutch and suggested a change. The relationship with Eddie got a little bit tense.

In the meantime, all the story with Eroles and the monastery had happened, and we had already started to travel around in Catalunya. Eddie helped us to explore the rest of the more southern part in all details. When Gabriel finally returned to Vilafranca, to pay 500 Euro and bring the car to the monastery in Pontos, he came at least another hour further. Then the gears again wouldn’t work, and he had to stop on the side of the road. 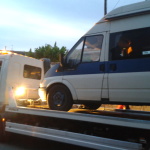 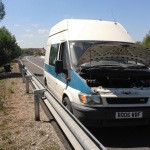 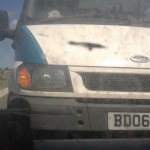 ÖAMTC, service-truck, this time the journey went to a little village in the Manresa area, Artés. After a closer examination of the car they found out that the clutch and another system in the engine had to be repaired, and it would cost around 1.300 Euros. Gabriel shouted and jumped one meter high, and finally signed the papers to scrap the car. A week later, he returned with our friend Julia to pick up all the remains, including the Whiskey bottle, that could now be emptied.

9.700 Euros of acquisition, repairs, tires, road service and insurance costs over a total of 10.000 kilometers. Roughly calculated another 1.200 Euros of petrol makes 10.900 Euros total cost of ownership. 726 Euros per month or 1.09 Euro / kilometer. (Oh my god, how could we ever afford this????) A disastrous ecological footprint from which we will never ever recover …

Even though – we were all very sad. The place where Eddie had left us was only 150 km away from the monastery. Maybe our prophecy – from the beginning of a golden community time wherever Eddie would die – was true?

Then we had to leave the monastery, another sad experience. A friend offered us a house to stay over the winter. When I looked on the map it was like a shock. The house was just 1.5 km away from Artès, where we had left Eddie! What a coincidence ..
In fact we saw him several times later, when we were already living in the house in Calders, passing by with the bus to Manresa. On the last occasion they had already started to ripe off his rooftop. It was a horrifying experience, and we were quickly turning Leon’s head into another direction. Our beloved Eddie!

There is a little post scriptum to the prophecy:
Months later we were visiting with Daniel and Queralt and their little son Vitai an old farm in a beautiful valley, not far from our new home in Calders. They were enthusiastic about the place and willing to start a community with us there. It is really a beautiful place, very remote, with a wild riverbed, old stone houses, various trees.
It is called La Coma. When we were looking on the map we got shocked: the place was just 10 km away from the spot where Eddie had died on the motorway.

One thought on “Eddie, The Prophecy and How We Discovered the Beauty of Southern Catalunya”