If you are used to celebrate the new year with goulash, fireworks and dancing at midnight, you will probably be a little bit disappointed if you visit Barcelona at that time.
But .. there is another nice tradition. Even though there are some big public parties at the fountain of Montjuic, on the Plaça de Catalunya, La Rambla and others, no public firework shows are taking place in Barcelona. The crazy drunken atmosphere with waltz and pyrotechnics that you would see in Paris, London or Vienna is missing.
One of the reasons for this might be that the new year celebration in Spain starts not before, but after midnight. Until midnight you will find only tourists on the streets, because the inhabitants of the city are at home, eating together with their families.

As an Austrian, I am used to this tradition of eating fish, especially salmon and herring, and at midnight goulash soup. Normally we would go out with friends before midnight, drinking Mulled wine and celebrating a lot already before the new year, often in public parties or on the street. We would exchange little gifts like: little pigs, chimney sweapers or four leaf clovers made of chocolate for the good luck. Then we would melt lead over a flame, and pour it quickly into cold water to create bizarre shapes that would tell us about our fortune for the new year.
Exactly at midnight, we would countdown the last 10 seconds, and then at midnight hug every body around even stranger and dance with them the Blue Danube waltz. Then we would watch the fireworks all over the horizon and drink the sparkling wine ..
(Gabriel)

However in Spain, instead of fireworks and dancing on the street, you can be part of another really nice tradition. First, you’re supposed to wear red underwear for the good luck. (This was a little bit tricky with our limited selection).

And then towards midnight you need to gather like everyone else in front of the TV, with 12 grapes in your hand. Yes, single grapes.
We had the luck to spent the evening with our friends Ana, Saverio, Nerea and Luca who instructed us very well, so listen carefully.
Now you can make a wish for 2015. The wish will only come true when you are very precise and don’t make a mistake in the timing!
When it’s time, you eat one grape after every chime of the clock in the countdown to midnight. Dong, one grape, dong, next grape, and so on. Attention, the 4 first chimes are for the quarter, so you have to skip them! Just watch the people around you and on the TV when to start – then everything will be fine.
We were surprised that this tradition is not a nice to follow, but a must. Everybody is doing it!
And now I know why we have seen so many grapes on display the last days .. 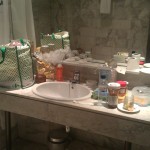 Leaving our stuff behind and 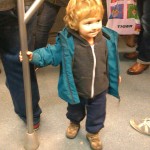 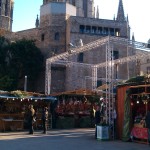 to visit the christmas markets 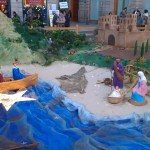 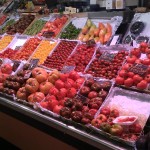 with all the tomates 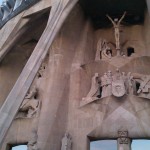 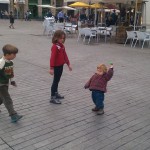 with our friends kids 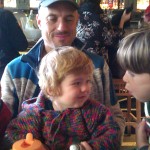 to play and joke 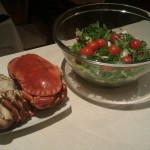 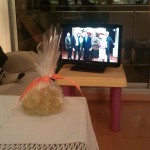 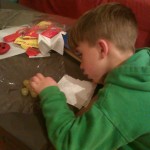 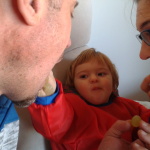 and eat them (reenacted scene) 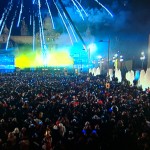 Then, after midnight, we were wishing us a good year, drinking our sparkling wine and chatting a little bit more until we fell asleep. Without young kids, you would go to one of the many new year parties in bars and nightclubs for dancing and flirting and not return until sunrise.
No problem with public transport: the metro in Barcelona is operating all night long. Tip: Book your ticket in advance.