Park Güell – Honestly, this is the most beautiful garden architecture I have ever seen ..
Commercially it was a disaster for the creators, but spiritually a firework of creativity with the potential to spread around the world. What an inspiration!

Info:
The entrance to the Park is free – but if you want to visit the monumental (=really stunning) zone, you pay 8 Euros, and you have to register for hourly visitor slots. Gaudí’s house, “la Torre Rosa,” can be only visited for an another entrance fee.
At the upper end of the park (free to visit), there are several tables where you can enjoy a picknick with your family or friends.

I have to admit we came there with just a little idea about the famous Antoni Gaudi and his work in Barcelona. Which was good, because I could see the park with open eyes, without any idea about what it is or should be.

And so I was just surprised by the creativity of this man. His playful combination of nature and architecture, melting into each other. All buildings, bridges and statues in this park are round and naturally formed – you don’t know any more if the stone is growing out of nature or nature out of stone ..

The view over Barcelona

Street artists on every corner 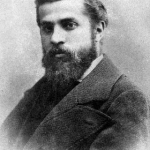 The park was designed by the successful entrepreneur Eusebi Güell and Antoni Gaudí, a renowned architect that built several famous buildings in Barcelona, among them the “Sagrada Familia” cathedral. Gaudi had a jester’s license from his patron to create this estate for the rich. Between 1900 and 1914 the park was built as a high quality residential estate with latest technological advancements.

Gaudi incorporated inspirations from organic shapes found in nature and the deep analysis of geometry and its shapes. Wikipedia says you can find many motifs of Catalan nationalism, but also elements from religious mysticism and ancient poetry into the Park. Appearently the main structure contains elements of the Temple of Apollo of Delfos. Gaudi himself was convinced about his work: He bought a house in the park and lived there from 1906.

Imagine you could live on a place like this? Everywhere you go, you would find harmony and love inside the structures. You would see only round shapes, coulorful patterns, an explosion of creativity. It is simply stunning to walk around and feel the deep love for nature that Gaudi was expressing in his art. Funnily, you can find many artists that present their own creativity on the pathways around the park: musicians, performers, creators of juwelry and little sculptures. I had the feeling that the creativity of the park was unleashing also the creativity of the people.

Imagine more people would build their homes or public buildings with Gaudi’s shapes. What coulorful and stunning cities we would have! In Barcelona you can find already a lot of Gaudi’s spirit. And I don’t talk only about the many houses and the new cathedral Sagrada Familia he designed himself. Also many other bulidings and simple creations of other artists and builders carry forth his freedom and love of little beautiful details.

Some examples of Gaudi and non-Gaudi Barcelona today: 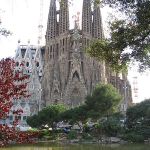 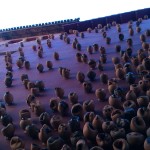 Pots on a wall 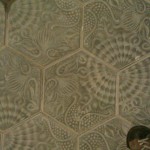 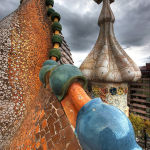 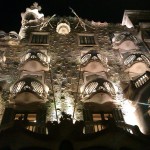 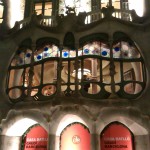 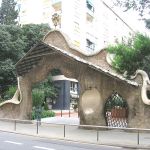 In the end, the Guell/Gaudi dream estate remained unsuccessful: of the 60 plots into which the site was divided, only one was sold. Good for us: In 1926, the park was officially becoming public and in 1984 declared a UNESCO World Heritage Site.

When I read all the story, I can’t believe that the park was probably considered by Gaudi as a painful failure. He created it without knowing that it would become one of Barcelona’s most visited tourist sites.

I would love to be part of a cummunity where people are expressing their creativity in a similar way. Maybe now is the time to Gaudi-tize the world!